<$BlogRSDURL$>
embargopoets
Wednesday, August 08, 2007
Talk about embargoed poets! The University of Iowa Press has just published a collection of poems by Guantanamo prisoners called : Poems from Guantanamo - The Detainees Speak. ($13.95, hardcover) The detainees have been composing and writing poetry, but the Pentagon has refused to declassify the poems, saying that poetry "presents a special risk" to national security because of its "content and format". Many of the poems have been lost, confiscated or destroyed, and a number have yet to be cleared for publication, but this small collection speaks with loud voices.
Adnan Farhan Abdul Latif, in a poem called Hunger Strike Poem, says:
They do not respect the law,
They do not respect men,
They do not spare the elderly
They do not spare the baby-toothed child

They leave us in prison for years, uncharged,
Because we are Muslims.


and a poem by Jumah al Dossari

Take my blood.
Take my death shroud and
The remnants of my body.
Take photographs of my corpse at the grave, lonely.

These poems, and the short biographical sketches which accompany them, let us see these up until now nameless, faceless "detainees" as human beings, creative, passionate friends, brothers, poets. We need to listen closely, and make a new future for the world.  ¶ 7:15 PM (8) comments
Friday, January 20, 2006
two poems for today

a poem from Aharon Shabtai, from his book J'Accuse, translated by Peter Cole

Even after the murder
of the child Muhammad on Rosh HaShanah
the paper didn't go black.
In the same water in which the snipers
wash their uniforms,
I prepare my pasta
and over it pour
olive oil in which I've browned
pine nuts,
which I cooked for two minutes with dried tomatoes,
crushed garlic, and a tablespoon of basil.
As I eat, the learned minister of foreign affairs
and public security
appears on the screen,
and when he's done
I write this poem.
For that's how it's always been -
the murderers murder,
the intellectuals make it palatable,
and the poet sings.

for the ghost prisoner
when nobody knows what
you do when you're in there
where nobody's looking.  ¶ 6:33 PM (75) comments
Tuesday, January 10, 2006
to read my essay on Nadia Anjuman, 25 year old afghan poet beaten to death by her husband (as well as many other wonderful essays and poems) go to:
www.poetsagainstthewar.org  ¶ 7:38 AM (1) comments
Wednesday, June 29, 2005 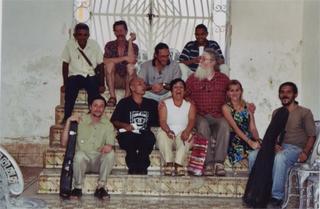 Blogger poet Gary Lawless with Cuban poets in Trinidad, Cuba, at the House of Culture  ¶ 7:35 PM (1) comments
Tuesday, June 28, 2005
for a really informative essay on the Treasury Dept.'s embargo on written work, please check out www.wordswithoutborders.org/article.php?lab=EAllen  ¶ 6:08 AM (0) comments
Thursday, June 16, 2005
The literature embargo has been changing over the last few months, due to public pressure, articles in places like the New York Times book review, and the threat of court cases by publishers.
One author, Shirin Ebadi,Iranian activist, judge, lawyer and winner of the 2003 Nobel Peace Prize, had little hope of seeing her book in print in her own country, but was surprised to learn that any US publisher who decided to publish her book would have risked up to 10 years in jail and fines starting at $250,000 under the Treasury Department's embargo laws.
Ms. Ebadie and publisher Arcade Books, joined the Association of American University Presses and PEN American Center in a lawsuit against the U S Treasury Dept. (Arcade and the PEN Center are readying to publish an anthology of post-revolution Iranian writers.
The Treasury dept. has somewhat relaxed the embargo on written work, but the embargo still covers those who work for the Cuban government. I have been working with Cuban poet Manuel Alberto Garcia Alonso, who is a poet, novelist, actor, theater director, and a cultural director in the Cuban city of Trinidad. Since Cuba is a socialist republic, almost everyone works for the government. Are Manuel Alberto's poems illegal in the US?
for information:
Ken Rodgers/Kyoto Journal
http://pen.org/corefreedoms/90.html
www.thetranslationproject.com
www.alternet.org/story/20247/  ¶ 6:41 PM (1) comments
Thursday, April 07, 2005
A poem from the book Arrows and the Bow, by Sudanese poet Ladu Jada Gubek, published by Africa World Press:

What do you think you are doing?

Canada, China, Russia, Sweden,
what do you think you are doing?